On a hot mid-July afternoon, Starling Marte launched a 430-foot long home run against reliever Oliver Perez into the left field bleachers giving his team a 2-1 lead in the top of the eighteenth inning against the Nationals. Of his nine home runs in 2016, the Pirate outfielder hit the ball an average of 413 feet, over 16 feet above the MLB average.[1] Any casual baseball fan might expect Marte to hit more homeruns based on these distances.

On the surface, Marte maintained a slightly above average .145 isolated slugging (ISO) and produced more fly balls than in 2015 when he hit a career high 19 home runs. But his 87.9 average velocity exit velocity was 1.1 points below league average, which in part explains his home run drop in 2016.

Marte is part of a small subset of players this past season that hit long home runs but very infrequently. The average home run distance in this group (group 1) was 415 feet about 21 feet further than the rest of the league.[2] [3] 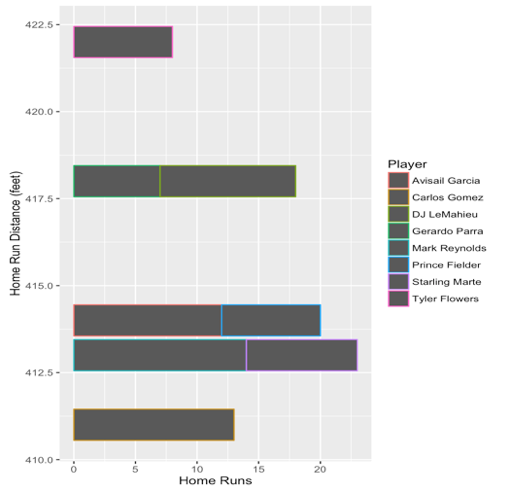 This group of players includes Mark Reynolds and Prince Fielder, both members of the 40-home run club during their careers. However, Fielder’s power was diminished due to lingering neck injuries that forced him to retire earlier this summer while Reynolds has struggled to break 15 home runs over the past two seasons. It is a slight surprise that lightweight hitting outfielders Paulo Orlando, Geraldo Parra, and Avisail Garcia averaged 414 feet on their home runs. Orlando and Parra combined to hit a meager 12 home runs in 2016.

Although some of these hitters might be expected to hit more homer runs, the numbers tell a different story. As a whole, the group one averaged 0.8 less fly balls (FB%) and retained the same home run to fly ball rate (HR/FB) as in 2015. They also had no change in their home run per at bat output. Marte is the only clear outlier in this group because he hit 5.70% more fly balls but experienced a 10.2% drop in HR/FB compared to the previous year.

One might even argue that the group one hit more home runs than expected based on their below average 29.0 FB% and above league average 11.2 HR/FB.[4] When this group did hit fly balls they averaged 208 feet, which was 21 feet less than players that hit at least 25 home runs with an average 410 feet (group two). This is hardly surprising given that the latter group features prolific power hitters including Giancarlo Stanton, Nelson Cruz, and Mark Trumbo.

A possible explanation for the discrepancy between the group one and group two’s home run output potentially lies in their approaches at the plate. For example, Marte and LeMahieu weren’t actively trying to pull deep home runs and instead were more focused on hitting the ball to left, center, and right field. These players tended to spray the ball into the opposite field on breaking balls and off-speed pitches trading home runs for singles and doubles.

On the other hand, however, Trumbo and Evan Longoria also sprayed the ball to all fields but also hit 47 and 36 home runs respectively. Even the pull heavy Mike Napoli tended to use all fields against fastballs this season.

The answer lies closer to the group’s differences in FB% and exit velocity. In 2016, there was moderate 0.45 correlation between exit velocity and home run distance.  The first group’s 88.8 exit velocity was below league average (89 mph). Only LeMahieu, Butler, and Flowers average exit velocity topped 90 mph. By contrast, the second group averaged a 93.1 exit velocity and a more robust 36 FB%, hitting the ball harder and in the air more frequently, which makes it hardly unsurprising that they hit more home runs.

The above plot shows that over half of the of hitters (who have averaged at least 410 feet on home runs) topped the 20-home run mark in 2016. The Rockies’ Carlos Gonzalez averaged a MLB best 427 feet on his 25 round trippers. Similarly, Nelson Cruz and Mark Trumbo, two of the most dangerous home run threats averaged a combined 413.5 feet on home runs.

This makes Marte’s 430 foot blast all the more exciting knowing that his next home run will probably not come until a few weeks later. Just how many he or the others will hit, however, remains an open question until next season.

[3] Despite averaging over 410 feet on home runs, Jose Peraza, Cristhian Adames, and Ivan De Jesus Jr. were excluded from this group because they hit 3 or fewer home runs.

We are kicking off our new series with looks at sports betting and staff picks. Check out the staff picks from the… https://t.co/spOYLBIhog
h J R
CMUAnalytics

Who do you have winning the super bowl?
h J R
CMUAnalytics

This message is only visible to admins.

Error: An access token is required to request this resource.
Type: OAuthException
Solution: See here for how to solve this error